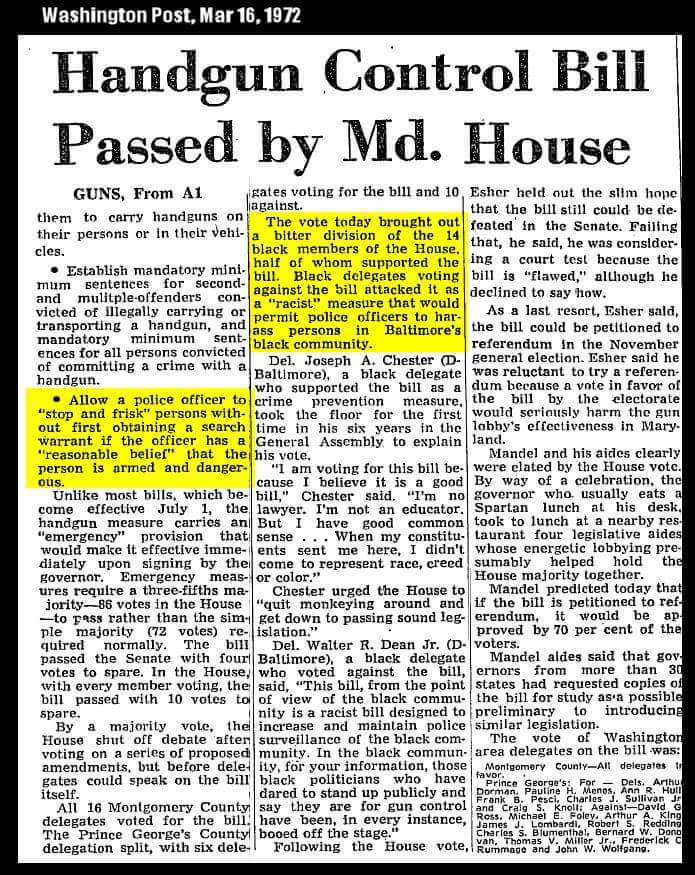 Police who have frisked people suspected of illegally carrying handguns report that in most instances they acted because someone told them the individual was carrying a gun or because they noticed a bulging pocket or suspicious behavior.

John C. Roemer III, executive director of Maryland’s branch of the American Civil Liberties Union, said he has been surprised that his organization hasn’t received a single complaint about alleged police abuse since the law was enacted.

An aide to Rep. Parron Mitchell (D-Md.) Baltimore’s, black congressman and a staunch foe of the law when it was being debated, said his office has received few, if any, complaints about abuses, but Mitchell remains unhappy with the law.As for the law’s effect on crime, Baltimore County Police Major Charles Rockenbaugh said, “We have not experienced any appreciable change due to the new gun law.” Spokesmen for the Montgomery County police and Baltimore City state’s attorney’s office concurred.There were 27,337 handgun sales last year through registered dealers in Maryland. State police expect that sales this year will be about 2,000 less, which Gabriel and gun dealers interviewed said was apparently due to public misunderstanding of the permit law.“It’s really put a dent into our sales,”‘ said an Annapolis gun dealer.Under the handgun law. security guards, special policemen and private detectives who had been exempted from needing to have a permit under the old law were given until next March 27 to obtain a permit.There are more than 10,000 security guards, 2,500 special police and about 1,000 private detectives in the state, Gabriel said. Most of them will be seeking permits in the next six months, threatening to lengthen the state police’s present applicant backlog.Walter Kolon, general manager for Wells Fargo Security Guard Service’s local office, said that unless the permit processing is quickened, a long wait for permits by employees of private security firms could be very damaging to them and their companies. He said 15 Wells Fargo employees have applied for permits and are still waiting for them.It takes the state police an. average of three to four hours to investigate each applicant, a job that keeps one officer at both the Rockville and Forestville state police barracks busy full time. In Baltimore City seven troopers work full-time checking applicants.